Get a sense of what happens behind the scenes in our museum with a look at some of our objects in the collection.

The poi is a pair of balls made from raupo reed, flax (New Zealand flax, or Harakeke in Maori) or corn husks attached to a string and swung by the hand in a rhythm and song movement. The word poi refers to both the balls and the dance, which normally includes hitting and swinging the ball on its string, accompanied by music or a chant of some kind.

Traditionally poi were used as a form of wrist strengthening and exercise. Maori carried moa eggs in small woven flax kits hung around their body with cords. Warriors put weights in the kits that they swung to build up wrist strength and flexibility for combat with hand weapons. With softer and lighter filling, these kits were also used by women for wrist exercise, to prevent strain when weaving cloaks.

Whilst poi may have started out as an exercise, poi performances in the 19th Century were used as a form of entertainment for tourists. The poi balls also became popular decorative souvenirs for people to take home after the song and dance routines.

In 1984 a disco song, ‘Poi-E’ was written and released by a Maori linguist and a hip-hop enthusiast to engage young Maori’s with traditional culture. The track was a huge hit, staying in the New Zealand Top 100 Chart for 22 weeks, with 4 weeks at Number 1. The song took poi performances to the world stage and the modern fire-twirling poi, seen amongst street performers around the world, evolved after this entertainment tradition.

52 pairs of poi were donated to the Mary MacKillop Place Museum collection from a Maori Catholic priest of North Island, New Zealand. The majority of these are small plastic decorative souvenirs. However the pair shown demonstrates traditional poi construction with New Zealand flax.

There are many different kinds of objects in the Mary MacKillop Place Museum Collection, including a sizable amount of Indigenous art. The object depicted is an incised bitumen-covered slate showing a Wandjina figure. It was purchased by an unknown Josephite Sister in 1986 from a shop in Kununurra in Western Australia. It was then given to the donor by the Josephite community in Turkey Creek in 1986 when donor was leaving Turkey Creek.

It is suspected that this shop was the Waringarri Arts Centre, established in 1985 in Kununurra. It was the first Indigenous Art Centre in the region. Their first art coordinator, Joel Smoker, made regular visits to the former mission station at Kalumburru. Here, as in several other Kimberley communities, husbands and wives customarily painted together and supported each other making artefacts such as carved and decorated boab nuts, tools and weapons, ceremonial items and the first rudimentary paintings in ochre and resin on bark. If proven to provenance from an identified artist within this community (and new research indicates that this is the case) then it is an artwork of great significance. Time and again, new research undertaken as part of the wider collection documentation process has revealed new ways of looking at our objects on a number of occasions.

Wandjinas are only found in the Kimberley region (north-eastern Western Australia), nowhere else in Australia. They are deeply spiritual to the people of this area, who are known as the Mowanjum people, and comprise of three language groups, the Worrorra, Ngarinyin and Wunumbal.

To these people, the Wandjina is the supreme Creator and a symbol of fertility and rain. They are the ‘spirit in the cloud’ and are partly human and partly cloud-like. Their ancestors have been painting Wandjina (also spelled wanjina) and Gyorn Gyorn (also called Gwion Gwion) figures in rock art sites scattered throughout the western Kimberley for millennia. This is the oldest continuous sacred painting movement on the planet.

Unique to the Mowanjum people, Wandjinas (pronounced ‘wannias’) have large eyes, like the eye of a storm, but no mouth. It is said they have no mouth because that would make them too powerful. They are often depicted with elaborate headdresses, indicating different types of storms.

The Wandjina Spirit holds as much importance to their traditional custodians as the Holy Trinity holds for Christians. The imagery of the Wandjina belongs solely to the Mowanjum people and it is extremely insensitive for those outside to imitate such figures. 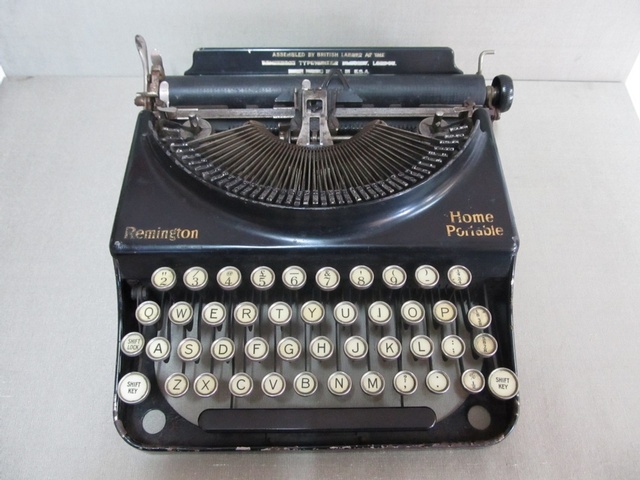 It is not known how this typewriter came into the museum, but it is a lovely example of the type of technology available to the Sisters of Saint Joseph during the 20th Century.

Typewriters began their commercial productions in the 1870s and quickly gained popularity. Remington produced their first typewriter in 1873 in Ilion, NY. Prior to this they had manufactured rifles, supplying Union soldiers during the American Civil War. Remington introduced the QWERTY keyboard, and the success of the follow-up Remington No. 2 of 1878 – the first typewriter to include both upper and lower case letters via a shift key – led to the popularity of the QWERTY layout.

The Remington typewriter branch opened up factories and offices around the world. This Remington ‘Home Portable’ version was the British variant of the US ‘Remington Portable #3’ and assembled in London using parts made at the Remington factory in Ilion. Approximately 300,000 of these Remington typewriters were manufactured and this was a large improvement on previous Remington designs.

Portable versions of typewriters were developed in response to requests from war correspondents in WWI and the ‘Remington Portable #1’ was produced from 1920. By the 1930s they had rolled out the Portable #3 and the machine came in various attractive colours and colour combinations, such as blue/turquoise, green, burgundy, eggplant, cream/black and red. Our version is in a practical black and dates to 1935. Its original price was $60US, equivalent to around $800US today and it still works!

The ‘Remington Portable #3’ (‘Home Portable’) was the preferred typewriter of many writers. It makes the classic film noir typing noise when in use and is in a number of museum collections dedicated to authors. The portability would have also appealed to the Sisters of Saint Joseph on their many missions to help those in more remote parts of the world.

Typewriters are no longer manufactured by the Remington Company; it stopped making models in the 1960s. The computer spelt the death knell of the typewriter in general; very few are manufactured today around the world. The Remington typewriter branch has morphed into the Remington Products Company and focuses on hair and grooming products.